Argentina players’ families are having a horrid time in Qatar, enduring power cuts at their hotel and finding glass in a drink 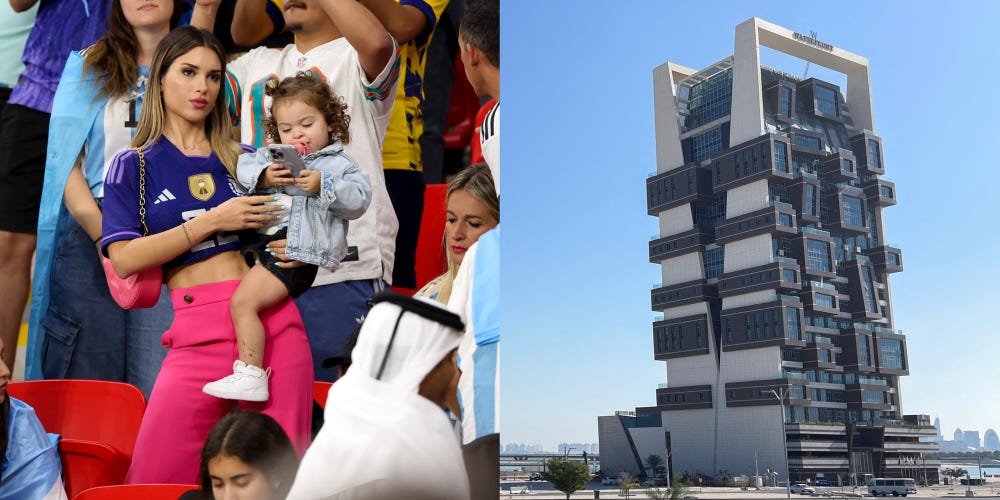 Agustina Gandolfo, the wife of Lautaro Martinez, is among those who have been staying at the Waterfront Hotel.Getty/Jean Catuffe; Reuters
Share

The families of some of Argentina’s soccer players are having a difficult time at the World Cup in Qatar, enduring power outages at their hotel and even finding glass in one of their drinks.

MailOnline reported on Thursday that a number of the women were forced to flee the five-star Waterfront Hotel late on Wednesday night after the power went out in the building.

They, along with their children, had to be ferried away to an alternative luxury hotel on an island in an emergency move.

A source close to the group told MailOnline: ‘The Argentines have paid a lot of money and do not expect to have to sit in darkness in their hotel rooms – and there were safety issues too.”

Just days prior to the blackout, Gandolfo had been taken to hospital after finding pieces of glass in her drink while at a club, according to MailOnline.

The 26-year-old had been out celebrating Argentina’s semifinal win over Croatia.

She sought medical help fearing she may have drunk some of the glass, but medics who examined her said she did not suffer any injury.

According to MailOnline, some locals accused Gandolfo of planting the glass in her own drink, to which she responded angrily on Instagram.

“A disgrace, we have the complaint and witnesses at the club,” she said in an Instagram story.

While some of the wives and girlfriends may be having a tough time in Qatar, Argentina’s team is having the opposite experience.

Lionel Scaloni’s side plays France in the World Cup final on Sunday, in what will be Lionel Messi’s last ever international appearance and his final chance to win a World Cup.

Messi and the team made the final in 2014; however, they were beaten by Germany.Agustina Gandolfo, the wife of Lautaro Martinez, is among those who have been staying at the Waterfront Hotel.Getty/Jean Catuffe; Reuters

Buckingham Palace Servant Pleads Guilty to Stealing Items Worth Over $100,000 From…

Sophy-Yah, a multi-award winning gospel artist, has released a single to commemorate…